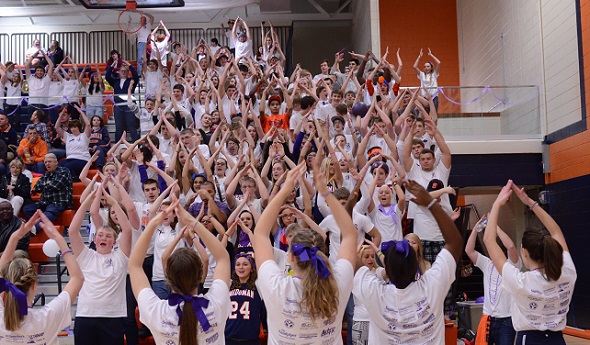 BRIDGMAN – On a bulletin board in Bridgman coach Mike Miller’s office hangs the numbers 146 and 31 – his boys basketball team’s record at home dating back to the 1995-96 season.

His players take pride in those numbers, updating them within minutes of returning to locker room after the latest win. And that pride extends to the 100-plus students packed into the corner bleachers that rise over the top of the locker room and into the rafters.

Bridgman is a Class C school with only 320 students. But roughly half made up the “Orange Crush” cheering section that piled into “The Hive” on Friday and helped the Bees add another win to the board.

A first-time Battle of the Fans finalist, the Orange Crush has been building one of southwest Michigan’s top cheering sections for half a decade with one goal in mind – to make Bridgman’s recently-constructed gym – renovated in 2012 – an old-fashioned, scary place to travel if you’re an opposing basketball player.

“I grew up with sports, and if you watch a college game – for example, a Michigan State basketball game – or go to Breslin Center, people are terrified. That’s all you hear on TV, and if you go to a game, it’s crazy,” said Bridgman junior Cullen Peters, a member of the boys basketball team who leads the Orange Crush during the football season. “It’s something at the high school level that we wanted to have as well. We’re feared. People are scared to come here.”

Bridgman on Friday was the second stop on this year’s Battle of the Fans III tour. MHSAA staff and Student Advisory Council members will visit Frankfort on Monday, Traverse City West on Friday and then finish at Beaverton on Feb. 14. Public voting on the MHSAA’s Facebook, Twitter and Instagram sites will take place Feb. 18-20, with the Student Advisory Council taking that vote into consideration when selecting the champion.

The winner will be announced on Second Half on Feb. 21 and honored with a championship banner during the Boys Basketball Semifinals on March 21 at Michigan State University’s Breslin Center.

The Orange Crush would love to be there to support its teams – the boys are 8-4 and made the Semifinals in 2010 – although the BOTF competition certainly has stoked the section’s long-standing fire even as Bees fans take pride in being old school.

Cheers are passed down from year to year, and the section works in concert with a sizable pep band that sits above and the cheerleaders on the adjacent end line.

“The student section shows up to support the Bees. That’s why we stick to tradition,” said junior Matt Starkey, who leads one of the section’s favorite passed-down cheers, “boom-chicka-boom.” “We like to focus on the game and what’s going on in the game.”

The Orange Crush’s initial rise pre-dates this current group of high schoolers, although it is because of tragic circumstances that athletic director John Norton can pinpoint when the section got rolling.

A 2010 senior, Jeff Demko, came to Norton to get his assistance in ramping up the student section’s efforts that basketball season. That included the purchase of Orange Crush T-shirts in advance of the Jan. 5 game.

On the way to the game that night, Demko and classmate Frankie Pipkins were in a car crash and died.

Although the current seniors were in eighth grade, the current leaders had ties to Demko and Pipkins and vividly remember that night. Demko’s Orange Crush shirt hangs to this day in Norton’s office. And his spark for the student section continued in close friend Adam Klug, who kept the Hive buzzing into the 2012-13 school year.

That fall, Bridgman students including current leaders Peters and sophomore Katie Hartzler attended the MHSAA Sportsmanship Summit in Kalamazoo, where a main focus was fan sportsmanship and the previous year’s inaugural Battle of the Fans.

“We had a lot of ideas already … but we ended up learning a lot,” Peters said. “It really helped us take it to the next level. The whole BOTF thing, it really motivated people from the freshman to the seniors. Sometime with a student section you’ll see seniors and juniors getting into it, and the freshman just messing around at the top. The competition aspect just invigorated everyone to pull out even more school spirit than they had and also sportsmanship, what lines to cross or not to cross.”

For example, they may yell “airball,” but they don’t continue past that first missed shot. Or, they’ll chant, “If you’re winning and you know it, clap your hands.” But they don’t follow that with anything about the opponent. 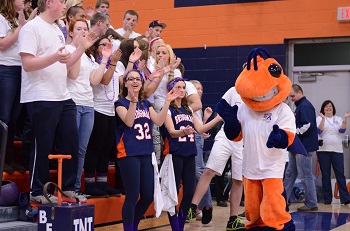 Seniors Jordan Alfredo and Hannah Malevitis were cheerleaders through this fall before deciding to leave the squad so they could spend their final high school winter in the middle of the cheering section’s front rows.  And, of course, there’s mascot Buzz, Peters’ freshman brother Logan, who pushes a lever into a fake “TNT” box after every 3-pointer to send Bees fans flying backward.

The section has invigorated the boys basketball team in particular.

Peters remembered running onto his floor for the second game of the season, and the teammate in front of him was so stoked he threw his warm-up lay-up over the backboard. “I’m like, ‘Dude, what’s going on?’ He was so jacked from the student section,” Peters said.

And the leaders can tell when it’s making a difference. Peters said the Bees were second in their area in points given up per game last season, a direct effect of the tough homecourt. Bridgman hosted Decatur on a Tuesday earlier this season and had its lowest Orange Crush turnout of the season – but his Decatur friends said after how it was the craziest atmosphere they’d ever played in.

“When other student sections come to the Hive, we’re constantly trying to do something no matter what’s going on in the game. We’re always cheering,” Alfredo said. “Other student sections get pretty intimidated by that, and that’s pretty cool for us. We’re such a small school, that doesn’t happen very much.”

When Bridgman was named a BOTF finalist, Norton called the five leaders into his office and told them to “spread the word.” Between Twitter and old-fashioned yelling, that didn’t take long.

But even if Bridgman doesn’t win Battle of the Fans III, the Orange Crush is proud it will be showing some purple when highlights are shown during the Basketball Finals on the Breslin Center scoreboard – Bridgman students raised $6,000 for eating disorder treatment Friday in honor of one of coach Miller’s daughters, who received treatment for the disease at Selah House in Anderson, Ind.

Bridgman might be among the smaller BOTF finalists. But it’s impact remains mighty.

“We want to be old-fashioned. You come to Bridgman, you’re going to be scared,” Peters said. “The focus of the game for the student section, and the crowd in general is (to create) a crazy atmosphere and be loud as heck.”

PHOTOS: (Top) Bridgman’s “Orange Crush” put the “A” in YMCA on Friday during the boys basketball game against Niles Brandywine. (Below) Mascot Buzz (freshman Logan Peters) is always on hand to keep the Bees buzzing. (Photos courtesy of Michael VandeZande.)