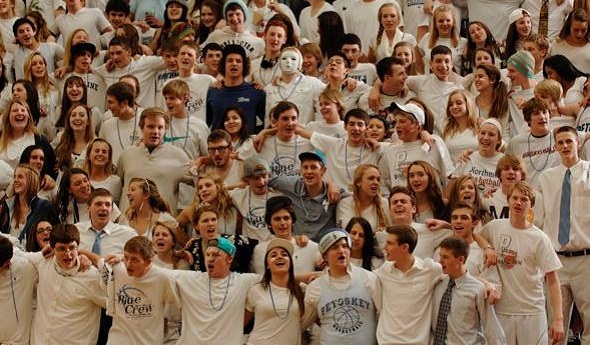 PETOSKEY -- Directly across the gym from the Petoskey student cheering section Friday, a toddler played on the first row of bleachers.

He wasn’t paying much attention to the Northmen’s boys basketball game against West Branch Ogemaw Heights. But he was wearing a blue T-shirt that read “Future Blue Crew” -- guaranteeing he will be soon enough.

At Petoskey High, a Class A school in a town where families have lived for generations, kids grow up aspiring not just to be the athletes playing for championships -- but also the Blue Crew members cheering them on.

While the other cheering section finalists in this season’s MHSAA “Battle of the Fans” contest were officially organized, for the most part, over the last year or two, Petoskey’s Blue Crew is nearing a decade as a constant at its school’s athletic events -- and a source of community pride.

“It’s such a legacy. Eighth grade, you’re looking forward to to being even involved in the Blue Crew, ... and now that we’re all seniors, everyone is listening to us, and we just want our teams to do well,” Petoskey senior Hayley Fettig said. “That’s a big part of it. We’re here to support our teams and cheer for our teams, and be a team ourselves.” 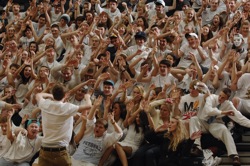 Petoskey was the fifth and final stop on the Battle of the Fans tour to find Michigan’s top student cheering section. Over the last five weeks, MHSAA staff and members of its Student Advisory Council also visited Frankenmuth, Reese, Grand Rapids Christian and Rockford. MHSAA-produced videos of all five finalists have been posted on the MHSAAsports YouTube page. Online voting will take place Monday-Thursday on the MHSAA Facebook page (you must “like” our page to vote). The winner will be announced Friday.

For most of its basketball history, Petoskey played in its old Central Gymnasium, an arena straight from the movie “Hoosiers” which seats about 1,500 fans and turned into a giant tunnel of cheers and shouts for every home game. But late in the fall of 2002, the newly-built high school opened a much larger gym that not only holds more fans, but also is more cavernous.

A bigger room meant a need for bigger spirit. And that sparked the Blue Crew, the brain child of members of the student council, some of whose names are still thrown around the halls to this day -- although the current seniors were in elementary school when it all began.

About 140 students piled into a “whited out” Blue Crew on Friday, plus 60 more in the jazz band that plays every home game and easily could be confused for one at the college level. To the left of the Crew sat about 50 more students not yet in high school. All sub-high school students are known as “Future Blue Crew,” while teachers are “Old-School Blue Crew.”

The Blue Crew often stands larger than it did Friday -- but on this night, the junior varsity and freshman basketball teams were playing simultaneously at other sites, and the hockey team was on the road. Petoskey’s Big North Conference foes are spread throughout the northern third of the Lower Peninsula, but the Blue Crew is known for making hours-long trips and constant support.

Members of the student council still play a big part. Those 12 students, plus 10 more take a one-hour leadership class taught by former girls varsity coach Matt Tamm. His classroom is a hall of memories itself, with photos of teams going back decades. Taking up center spot on a main wall is the original Blue Crew banner including its mission and three directives for generations to come.

“When I was younger, the older kids always told us, ‘You have to watch how we do this so when you’re older, you can do it how we did it,’ senior Brad Berkau said.

“You begin to learn when you’re younger what we do and how to go about cheering the right away. Not just boasting about our team, but not putting down the other ones too,” senior Nick Godfrey added.

That “right way” includes refusing to cheer negatively. Petoskey athletic director Gary Hice said it’s been four or five years since he’s had to tell the Crew that one of its cheers was crossing the line. Counselor Karen Starkey, who helps by coordinating parents to cheer with the students, said she hasn’t seen the Blue Crew respond to an opposing cheering section’s negative chant in at least two years.

Instead, the Crew pours its energy into more memorable ventures.

Starkey was diagnosed with breast cancer in January 2011, and her first chemotherapy treatment was on a game night.

She showed up in white, anticipating a white out. Instead, she found the entire Blue Crew in pink -- before receiving a group hug from the 200 or so students there supporting her as well.

“Those are the things these guys just jump out and do,” Starkey said. “It’s so not necessary, but it was just so cool.”