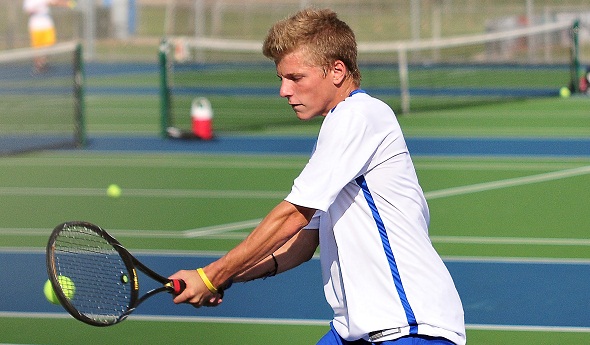 Midland Dow has won three straight MHSAA tennis championships. Ann Arbor Greenhills has won four. And Detroit Country Day has finished among the top two in each of the last four seasons.

To find them as favorites again at this weekend's Lower Peninsula Finals is no surprise. But there could be a few.

Novi has never won an MHSAA team tennis title, but is ranked No. 1 in Division 1. And St. Joseph, Grosse Pointe Woods University Liggett and Portage Central are all looking to get back into the championship mix.

Click for links to Finals qualifiers in all four divisions. See below for some of what to expect at every tournament this weekend, and come back Saturday evening and Sunday for coverage from all four Finals.

Neither the top-ranked team going in nor the team with the reigning individual champion have won an MHSAA team title – which could mean an interesting shake-up at the top.

Novi: With every flight at least a number five seed, and five flights seeded No. 1, Novi is both considered the favorite and set up for contention. The Wildcats won a Regional featuring No. 4 Northville and 2010 champion Detroit Catholic Central.

Birmingham Brother Rice: The Warriors finished second by four points last season and last won in 2009, but come in with seeds at every flight but one and three of those top seeds. The only player not seeded for Brother Rice is No. 1 singles player Gunnar Peery, but he’s the reigning MHSAA champion at No. 2. Reigning No. 3 doubles champs Joey Hildebrand and George Hamaty also are back this weekend, but split up – Hamaty is at No. 2 with a new partner.

Ann Arbor Huron: The River Rats are always in the Division 1 conversation, with two titles and a runner-up finish over the last four seasons. They are the reigning champions and seeded in every flight – with five No. 2 seeds and none lower than No. 4.

Individuals of note: Northville’s Tyler Gardiner is the reigning No. 1 singles champion and seeded No. 1 in that flight. But Utica Eisenhower’s Ed Covalschi also is nationally recognized, and comes in as the second seed.

This division has belonged to Midland Dow the last three seasons, and the Chargers are ranked No. 1 again after faring well this season against many of the top teams regardless of division.

Midland Dow: The reigning champions graduated the winningest player in MHSAA history in Jonathan Gurnee, but have seven top seeds including returning champions Austin Woody (No. 2 singles now, won at No. 3) and Juli Guerra (3 now, won at 4). Reigning No. 2 doubles champs Jason Chang and David Goslin also are back, with Chang playing No. 1 this weekend.

Portage Central: The Mustangs are seeking their first MHSAA championship since splitting the title in spring 2007, the last season before boys tennis moved to fall. They’re paced at the top by top-seeded No. 1 singles player Billy Heckman. He’s one of seven seeded flights, with three coming in as No. 2 seeds.

Grand Rapids Forest Hills Central: The Rangers finished runners-up last season and come in ranked No. 3. They’re seeded at all but No. 4 doubles – but that pair includes Joey McClure, who teamed with Greg Andrews to win the No. 3 doubles championship in 2011. Andrews is playing No. 1 doubles this weekend.

Individuals of note: Kalamazoo Loy Norrix’s Davis Crocker is the reigning champion and seeded second after falling to Portage Central’s Heckman at the Regional. Okemos’ Elan Dantus was part of the No. 1 doubles champion last season and is playing No. 1 singles. Reigning No. 4 doubles champions Andrew Murtland and Rob Chapekis of North Farmington are playing No. 1 doubles this weekend.

Detroit Country Day has finished among the top two in this division nine of the last 10 seasons and is ranked No. 1 again heading into these Finals.

Detroit Country Day: The Yellow Jackets earned the top seed at every flight for this weekend. Rishi Patel will attempt to repeat as the champion at No. 3 singles, and four doubles players who were part of three championship pairs are back as well but with different partners. Sven Kranz was the No. 1 singles runner-up last season, and is playing No. 2 this weekend with teammate Max Fliegner – considered one of the top players his age in the nation – seeded first at No. 1.

St. Joseph: The reigning runner-up is lined up for another run with seven No. 2 seeds and a No. 3. Both members of the reigning No. 4 doubles champion, Sam Singler and Jared Kuntz, are back but at higher flights. St. Joseph last won the team title in fall 2007.

East Grand Rapids: The Pioneers are ranked No. 3 and seeking their first top-two finish since winning the 2007 spring championship and then finishing runner-up that fall. Garrett Goldman won the No. 2 singles title last season and is seeded third at No. 1. East Grand Rapids is seeded in all but one flight.

Ann Arbor Greenhills is in the midst of a dynasty with four straight titles and five over the last six seasons. That only non-championship season, fall 2007, Greenhills finished second. Seven of the top 10 ranked teams have never won an MHSAA title.

Ann Arbor Greenhills: The Gryphons have six No. 1 seeds this weekend – three for singles and three for doubles. Reigning doubles champions Adhi Rajaprabhakaran (No. 3) and Nick Sandhu (No. 4) are paired up this fall and the top seed at No. 2.

Grosse Pointe Woods University Liggett: The Knights are ranked No. 2 and going for their first top-two finish since sharing the championship in 2002. They are seeded at four flights, with three of those coming in doubles.

Ludington: The Orioles have broken in among the contenders with some impressive finishes this season including wins over University Liggett and No. 6 Almont. Ludington is ranked No. 3 and has seeded players at Nos. 2-4 singles.


Individuals of note: Players from the Capital Area Activities Conference White have claimed the last two No. 1 singles championships, and hold the top three seeds this weekend: Williamston’s Michael Sienko is the first seed, followed by Portland’s Chance Conley and Lansing Catholic’s Matt Heeder with the third. Conley beat Sienko 6-4, 6-2 in last season’s championship match. Sienko won the No. 2 singles title as a freshman in 2009.

PHOTO: Ortonville-Brandon's Spencer Navarre, playing a match earlier this season, will lead his team into the Division 2 Final at Holly and Fenton. (Click to see more from HighSchoolSportsScene.com).