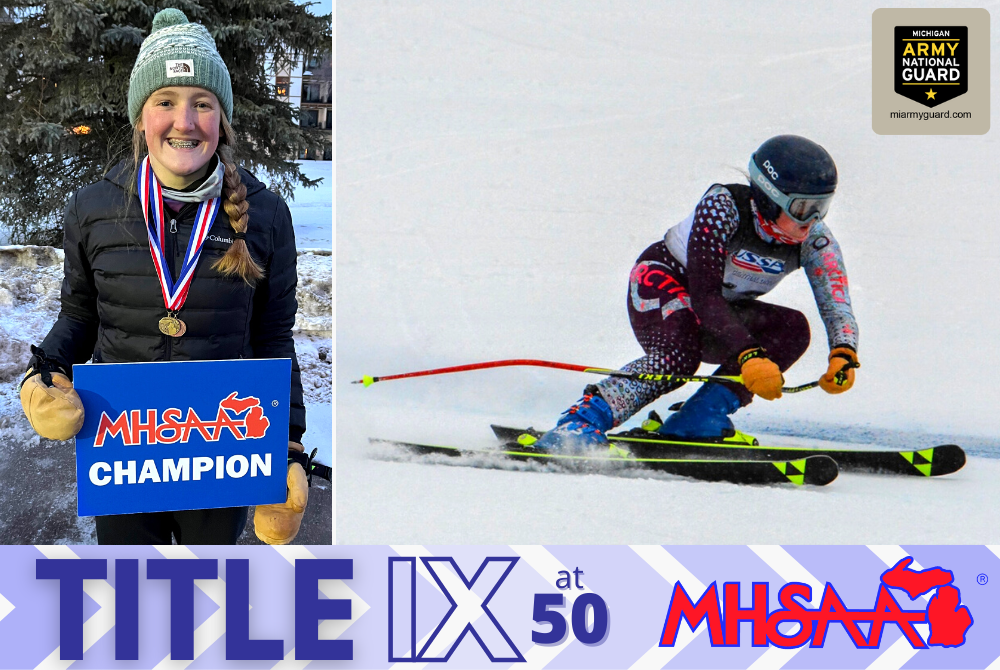 Marquette has one of the most recognized girls skiing traditions in Michigan, with five Division 1 championships and a runner-up finish over the last seven seasons and 13 championships total since the sport added a Finals level in 1975. Stern carried that tradition through the finish line of her career this past winter, adding another memorable highlight in her final high school meet.

Competing as an individual qualifier, Stern became the 12th Marquette skier to win a Finals championship as she raced to first in the giant slalom in a two-run time of 1:06.55. She also finished eighth in slalom with a two-run 1:06.64. Stern graduated this spring and will continue at Northern Michigan University, where she’ll study nursing and compete on the alpine ski team.

"Competing as a female athlete means I can accomplish many things throughout my life, in my sport and through my upcoming career. It allows me to push myself on the ski hill to always be faster than the boys, as Mikaela Shiffrin says. When I finish a race run, and right as my time is announced, I feel proud of the skier I've shaped into as my skills are constantly challenged on each race run with the new courses and new obstacles to overcome.

“We can't forget about the times of struggle and pain when a run doesn't go as planned due to a fall or other circumstances, but learn to overcome these struggles and hardships to learn and fix our mistakes to become a better skier. Using the skills I learned as a skier with determination, grit and passion, I can apply them to my day-to-day life as I begin to navigate college. So to me, competing as a female athlete isn't just about being a ski racer, it's about learning life skills that will help me on and off the ski hill." 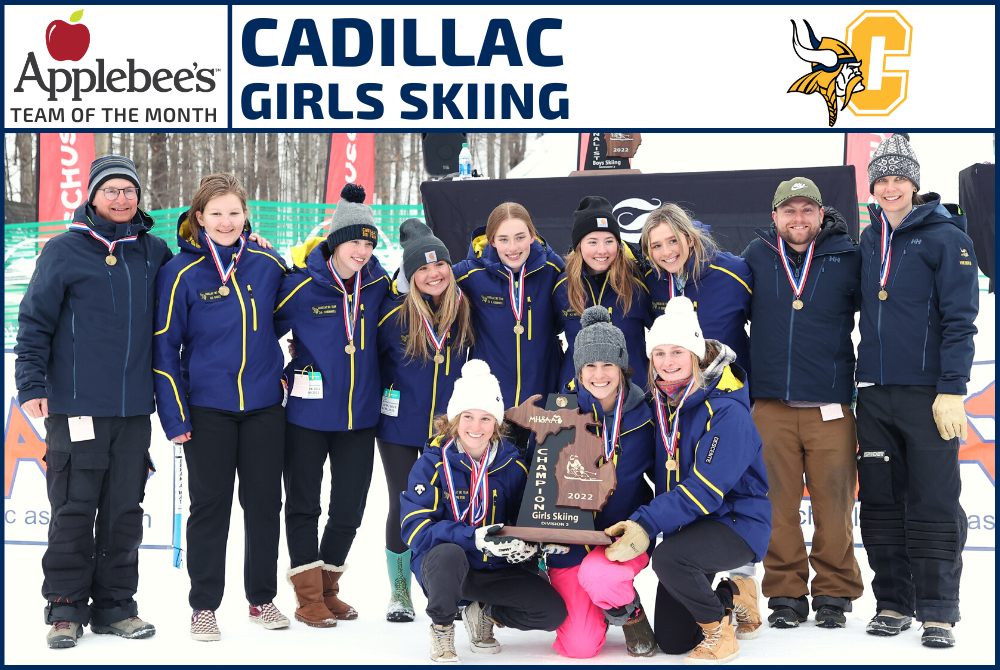 The Big North Conference, top to bottom, is the strongest skiing conference in Michigan.

On the girls side alone, Traverse City Central won its second-straight Division 1 championship this season, with Traverse City West the runner-up, and those two along with Division 2 power Petoskey have four Finals championships and seven runner-up finishes over the last decade.

It’s time to make way for Cadillac as well.

The Vikings – the MHSAA/Applebee’s “Team of the Month” for February, capped it off Feb. 28 by winning the Division 2 team championship at Schuss Mountain in Bellaire. The title was the school’s first in any sport since 1990 and first top-two Finals finish in girls skiing since 2001.

Cadillac had finished third in the Big North Conference behind the Traverse City schools and ahead of Petoskey this season, and then runner-up at its Regional to East Grand Rapids minus a top contributor out with an injury. But she returned at nearly full strength for the Final as the Vikings outpaced runner-up EGR by six points and third-place Harbor Springs by eight.

“Every week we’re facing the best teams in the state, and it’s hard to know how we’d do against teams outside of our league,” Cadillac coach James Netzley said. “Until Regionals, it’s hard to know how good we are, and even talking to the Traverse City coaches they were caught by surprise by how well we did at the state finals.

“We got third last year, and that opened up some eyes. We had several freshmen, and we skied well. Our goal was to improve one place – we were eying the big trophies, runner-up, or first place would be fantastic. Within reason, runner-up was right there, but again, we had to ski well.”

Here’s where it gets even more intriguing: Only one of the team’s top six was a senior.

The next placer’s performance will be recalled just as quickly. Junior Georgette Sake was the skier who had missed the Regional, and Netzley said she was about 80 percent for the Final. But that 80 percent was good enough to place 15th in the slalom and 24th in the GS.

Another sophomore, Mairyn Kinnie, rounded out the team’s scoring, placing 33rd in both events.

Netzley said his girls teams have always had the standouts to match up with the rest of the Big North Conference, but would end up in the middle of the standings with less depth – which makes sense as Central has twice as many students, West nearly the same and Petoskey an enrollment of roughly 130 more than Cadillac High.

But five of this season’s Vikings varsity should be back next year – junior Kinsey Cornwell and senior Emily Mason rounded out lineup.

Of course, Central, West and Petoskey will bring talented skiers back next season too, as will the other usual Division 2 Finals contenders. But the Vikings should enter next winter with an expectation of competing for the BNC title – which would be another first in a long time – and making another Finals championship run.