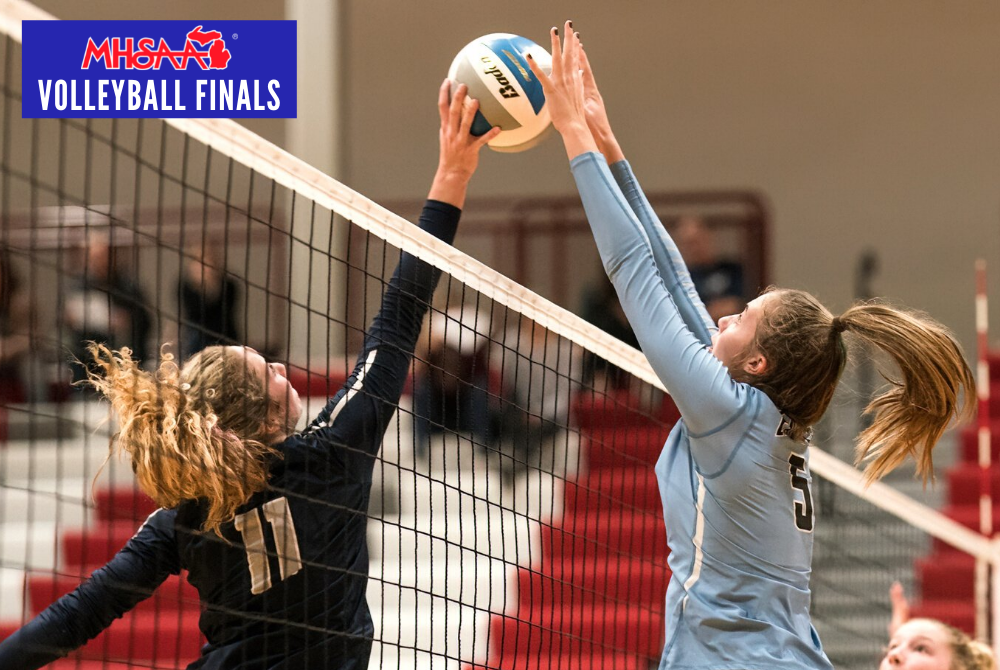 While all MHSAA Finals in every sport are filled with history-making opportunities, this weekend’s Volleyball Finals at Kellogg Arena in Battle Creek could require some significant updates to the record book.

Battle Creek St. Philip has defeated the Nos. 1 and 2 teams in Division 4 on the way to this weekend and can add to its record 21 Finals championships, or at least its state-best 30 appearances in championship matches.

Grand Rapids Christian in Division 2 can win a fourth-straight championship, becoming the seventh program to do so. Monroe St. Mary Catholic Central in Division 3 can become the 11th program to win a third-straight Finals title (and 12th on the list as Portage Northern did so twice.)

Six of the 11 Miss Volleyball Award finalists will be in Battle Creek, with winner Ava Brizard playing a lead role on a Bloomfield Hills Marian team looking to repeat in Division 1. Ann Arbor Skyline’s Harper Murray likely will be the favorite in 2022. Those seven stars certainly could make their way into the individual lists of the Finals record book.

And then there are the eight teams that have never won a Finals championship – and both Divisions 2 and 3 are guaranteed to have a team playing the last match for the first time.

Action begins Thursday with Division 1 and 4 Semifinals, with Divisions 2 and 3 on Friday and all four title matches Saturday.

All 12 matches will be broadcast on MHSAA.tv and (audio) MHSAANetwork.com. Click for more information from the 2021 Volleyball Finals Home on the MHSAA Website.

Below is a glance at contenders in each division. (Statistics are through Quarterfinals for Skyline and Notre Dame Prep and Regional Finals for the rest.)

ANN ARBOR SKYLINE
Record/rank: 54-3-2, No. 3
Coach: Chris Cristian, fifth season (190-41-8)
League finish: First in Southeastern Conference Red
Championship history: Has never played in an MHSAA Final.
Best wins: 3-1 (Quarterfinal) and 2-1 over No. 7 Northville, 3-0 and 2-0 over honorable mention Saline, 2-1 over No. 5 Farmington Hills Mercy, 2-0 over honorable mention Davison, 2-0 over No. 9 Novi.
Players to watch: Harper Murray, 6-2 jr. OH (604 kills, .439 hitting %, 81 aces); Lauren Lee, 5-8 sr. S (1,250 assists, 82 aces, 108 kills); Cari Bohm, 6-4 sr. MH/RS (295 kills, .380 hitting %, 72 blocks).
Finals forecast: Skyline has advanced to the Semifinals for the second time in three seasons after claiming a third-straight Regional title last week, and the Eagles have won 29 straight matches. They avenged an earlier loss to Northville and a tie to Saline, and would get a chance to avenge another defeat if they meet Hudsonville in the Final. Murray is considered one of the nation’s top juniors and made the all-state first team last season; she’s committed to continue her career at Nebraska and also played for the U-18 national team during its bronze medal run at the world championship tournament in Mexico this fall.

MACOMB DAKOTA
Record/rank: 31-4-1, No. 10
Coach: Neil Rucinski, third season (56-26-2)
League finish: First in Macomb Area Conference Red
Championship history: Class A champion 2012.
Best wins: 2-1 and 2-0 over No. 5 Farmington Hills Mercy, 2-0 over honorable mention Davison, 2-0 over Division 2 No. 5 North Branch, 2-0 over Division 2 No. 8 Cadillac.
Players to watch: Emma Thamarus, 5-11 jr. OH (279 kills); Erin Madigan, 6-2 jr. S (828 assists, 106 kills, 57 blocks); Olivia Gardner, 6-1 jr. MH (246 kills, .380 hitting %, 73 blocks).
Finals forecast: Dakota is on the rise, returning to Kellogg Arena for the first time since its championship season after winning a Regional title for the second-straight year. Four juniors and a sophomore fill the majority of the starting lineup with senior defensive specialist Skylar Myers. Dakota has lost only one set over five postseason matches, and half its match defeats this fall were to top-ranked Marian. Another loss was late in the regular season to New Baltimore Anchor Bay, and that one was avenged in the District Semifinal.

NORTH BRANCH
Record/rank: 45-8, No. 5
Coach: Jim Fish, 22nd season (1,217-211-51)
League finish: First in Blue Water Area Conference
Championship history: Three MHSAA titles (most recent 2016), four runner-up finishes.
Best wins: 3-0 over No. 8 Cadillac in Quarterfinal, 3-0 over No. 10 Essexville Garber in Regional Semifinal, 2-0 and 2-0 over No. 9 Frankenmuth, 2-1 and 2-0 over Division 1 No. 9 Novi, 2-0 over Division 1 honorable mention Clarkston, 2-0 over Division 3 No. 2 Monroe St. Mary Catholic Central.
Players to watch: Alana Deshetsky, soph. OH (302 kills, 68 aces, 348 digs); Adrienne Greschaw, 5-8 soph. S (1,107 assists, 64 aces); Bailey Gormley, 5-8 jr. OH (280 kills, 329 digs).
Finals forecast: The Broncos are headed back to Battle Creek for the first time since their most recent championship season, and with a lineup that could keep them coming back over the next few years as well. All six starters plus libero Hailey Green (744 digs, 75 aces) are sophomores or juniors; Deshetsky and Green earned all-state honorable mentions last season as freshmen. Five hitters had at least 194 kills entering the week, and 6-2 sophomore Kaela Chingwa was among that group and also had a team-high 108 blocks.

MCBAIN
Record/rank: 36-4-1, honorable mention
Coach: Shawn Murphy, 12th season (345-183-37)
League finish: First in Highland Conference
Championship history: Has never played in an MHSAA Final.
Best wins: 3-2 over No. 6 Calumet in Quarterfinal, 3-0 (Regional Final) and 2-1 over Beaverton, 2-0 over Elk Rapids, 2-1 over Division 2 No. 9 Frankenmuth.
Players to watch: Analiese Fredin, 5-7 jr. S (1,061 assists, 170 kills, 65 aces); Linde VanderVlucht, 6-1 jr. MB (192 kills, .319 hitting %, 50 blocks); Gabrielle VerBerkmoes, 6-1 jr. MB (292 kills, .385 hitting %, 55 blocks)
Finals forecast: McBain is making its second trip to the Semifinals and first since 2009; Murphy also coached that team and is in the fourth season of his second tenure leading the program. VanderVlucht earned an all-state honorable mention last season, and the Ramblers have a number of options on offense. Seniors Emma Schierbeek (328) and Jersey Scott (309) were tops entering the week among six players with at least 150 kills, and Schierbeek also was a team leader with 237 digs. McBain has won 21 straight matches, and the Quarterfinal win over Calumet avenged their first defeat of the season. The other three losses were to Division 2 opponents, and the Ramblers have lost only 17 sets total.

REESE
Record/rank: 33-5-1, No. 9
Coach: Angie Compton, third season (75-23-2)
League finish: First in Greater Thumb Conference West
Championship history: Has never played in an MHSAA Final.
Best wins: 3-2 (Regional Final) and 3-2 over No. 8 Cass City, 3-1 (District Final) and 2-0 over No. 5 Saginaw Valley Lutheran, 2-1 over Birch Run, 2-0 over Division 4 No. 7 Ubly.
Players to watch: Maddi Osantowski, 5-9 sr. OH (545 kills, 384 digs, 49 aces); Aydan Dalak, 5-7 sr. S (281 kills, 836 assists, 258 digs); Josie Johnson, 5-5 sr. DS (474 digs, 43 aces).
Finals forecast: Reese is making its second trip to the Semifinals and first since 2010, after adding a second-straight league title under Compton – who previously coached at Houghton Lake and Roscommon. Osantowski and Dalak earned all-state honorable mentions last season, and they lead a starting lineup featuring five seniors. Only one loss this fall was to a Division 3 team – No. 8 Cass City – and the Rockets had won their first of two regular-season matchups with the Red Hawks and then avenged the defeat last week.