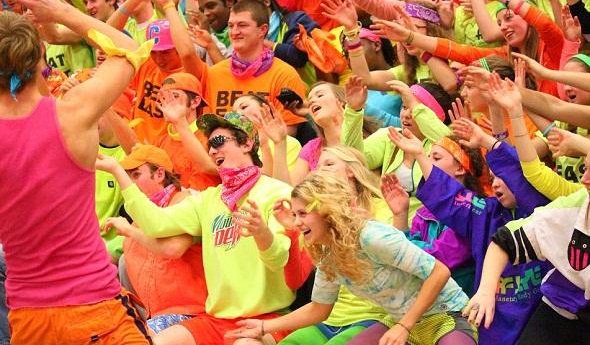 GRAND RAPIDS – For many high school hoops fans, halftime is a break – perhaps an opportunity to grab a pop or some popcorn, catch up with old friends, or at least take a seat and catch a breath.

But for the Grand Rapids Christian student cheering section, it’s no time for rest. Those 10 minutes might be when Eagle Nation does its best work.

For this “Battle of the Fans” finalist and its six senior leaders, halftime is their time. Some schools play music between halves, or run contests on the floor. At Grand Rapids Christian, everyone knows that after two quarters of supporting the play on the court, the halftime action is in the stands.

“People get into it, and it’s over in a flash,” senior Jesse Ludema said.

“We frown on down time,” senior Evan Metcalf added. “You can have down time when you get home.”

Grand Rapids Christian is one of five finalists for the MHSAA Student Advisory Council’s “Battle of the Fans” competition. MHSAA staff visited both the Eagles and Reese on Friday after starting the tour Jan. 21 at Frankenmuth. Trips will be made to both Rockford and Petoskey over the next three weeks, with videos posted of all five finalists on the MHSAA Facebook page. After an online vote and SAC discussion, the winner will be announced on Feb. 24. Clips from all five MHSAA-produced videos will be shown during the Girls and Boys Basketball Finals in March at the Breslin Center.

Eagle Nation prides itself on bringing the same enthusiasm to every game. But it was tough to ignore the extra juice Friday, with Grand Rapids Christian facing rival East Grand Rapids. The schools are just 2.5 miles apart, and their two football games this fall received hype statewide.

Eagle Nation’s senior leaders contributed in those grudge matches as well – but from their spots in the stands. “Our school is better served with us in the stands than on the field,” senior Joe Schierbeek laughed.

So what happened when Grand Rapids Christian’s second-quarter buzzer sounded? 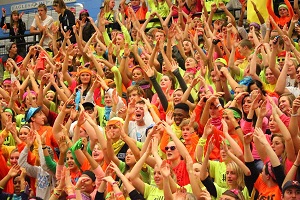 Students go bananas in a cheer led by costumed senior leader Cody Powers. Each Eagles class – seniors through freshmen – takes its turn doing a collective hip shake, a favorite in the Eagle’s Nest. A boxer throws left and right uppercuts before landing a knockout blow that falls the entire section backward. And on this night, Michigan State basketball coach Tom Izzo was in attendance and got some love from Eagle Nation – although it is only unconfirmed speculation that Izzo was there to check in on the “Battle of the Fans” craze.

Eagle Nation plans a theme for every home game, and Friday was all about neon. More than 400 students packed the sections behind the north basket, glowing in all hues of neon covering T-shirts, tank tops, pants, socks and head bands. Those six leaders each wore a hot pink tank top, with one letter painted on each spelling E-A-G-L-E-S.  With help of the administration, the leaders even sold bright $1 bandannas to everyone in the student section to top off the neon look. Even the basketball team got into the act: Players surprised their classmates by wearing neon-green ankle tape and those same neon bandannas during warm-ups.

While Eagle Nation had been loud in the past, this level of organization debuted this school year. Before, the students were always told to just cheer louder, but without much of a plan. Now, there’s a Facebook group. Theme nights are mentioned with other school announcements. On Friday, leaders held a lunchtime pep assembly for student section members, and they had a similar training assembly with eighth graders earlier last week.

Leaders also take seriously the word “Christian” spelled out in the name on their team's uniforms. Being an example of their faith is a priority.

“People don’t see what happens in our school every day. And when they come to games, they see our student section, and they take that as an example of who we are as a school,” Powers said. “So we want to show them who are, and that’s why we value character.”

“That’s not to say we don’t get rowdy, though,” Schierbeek quickly interjected.

In the end, it’s all about having fun – a theme that played loudly in Frankenmuth as well.  Metcalf watched the Frankenmuth video with a big smile. “Let’s visit them,” he said. "We can have a fan section dance party.”

But first the focus is on winning the “Battle of the Fans,” which to this student section is its “state finals.”

With his voice almost gone, Ludema gave some advice to the other finalists.

“Cheer loud,” he said. “And get some throat lozenges.”